I need your opinion!

Posted by Kismet on September 17, 2012 in Uncategorized

For those of you outside of the United States, you need to read this for background information about Michael  Vick and the horrors of his past. Those of us here, even those who aren’t sports fans, already know the story. No, this isn’t a sports post but you need to be up on the story.

This coming Sunday, September 23, Michael Vick  comes to town with the Philadelphia Eagles. My male peep will be working this game and can’t let it pass without some form of dissent about Sick Vick. He does have the power to go to the players’ locker room, but He won’t because He doesn’t want to lose His job-after all it provides me with my food. He will be seen by members of the Eagles’ organization and the Philadelphia press. Just something subtle will do. He thought He’d wear a shirt and He has two that would fit the bill. He said, “Kyla, which one should I wear?”. What good is one dog’s opinion when there’s a bunch of dogs out there whose collective opinions should pick a winner. I said to Him that I’d tell Him later.

I’m coming to you-help me make the decision. One vote per dog and you’re on your honor not to stuff the ballot box. Leave a comment and the winner will be worn. I realize both choices are Scottish Terrier related, but all dogs are invited to chime in since Sick’s actions were “crimes against caninity” (to coin a word). 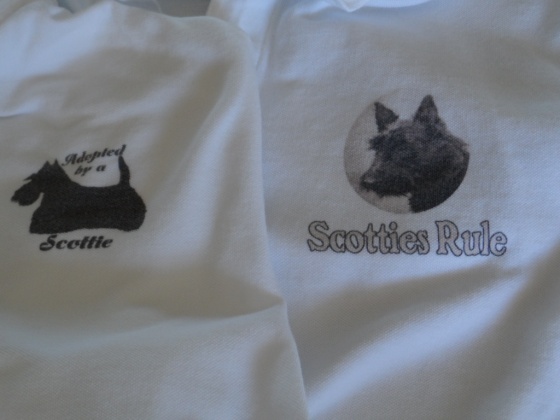 You get extra credit in a tie-breaker for a compelling reason for one of these.

← Everybody has to get into the act
Sick Vick report →

35 comments on “I need your opinion!”