Posted by Kismet on October 15, 2012 in Uncategorized

I’m going to catch you up on what’s been happening. I don’t need to catch up with all of you, I’ve been watching and reading. I just haven’t commented because I was choked up and my comments wouldn’t have been up to my normal standards (and that’s pretty low, right?) and you wouldn’t have wanted to read them.

The first thing is on the day Kenzie crossed, Mollie sent me a package. If you haven’t visited Mollie’s blog, you’re in for a surprise. Mollie is one wacky lady who lives with a zany cat, Alfie. something is always happening there and expect the unexpected. Molly grows on you-and you have to get used to her SE of England accent (“why can’t the English teach their dogs how to speak?” – Alan Lerner). Here they are:

We received the package and it got to us in great condition. I take back every mean thing I said about the postal service. Look at how it was addressed: 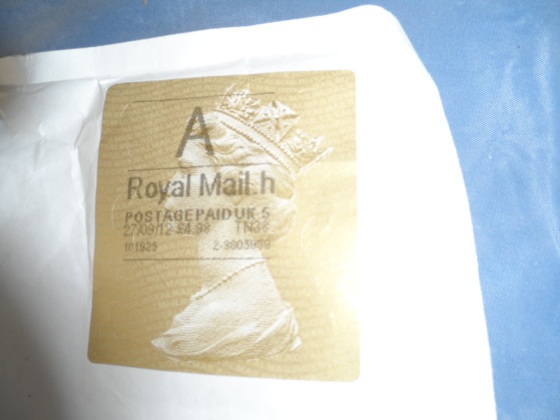 All Mollie had to do was put a picture of a princess on the package and call it “Royal Mail” and it automatically came to me. My nose told me that there was FOOD inside. I was all set to chow down, but He told me that it wasn’t a time for joy, but we’d save it for a celebration.  As Mollie would say, “Dank ya bery mooch”.

On Friday, we all went in the car. I was hoping this wouldn’t be a trip to the vet like Kenzie had the week before. I also hoped it wouldn’t be to the groomer-we’d done that just a while ago. After an hour, I realized we weren’t going to those places and we were on a ROAD TRIP. I love road trips. I started seeing signs giving the distance left for Los Angeles. Wonderful, you can’t fool this Spanish speaking Mexican Scottie girl-that means “The Angels”. We were going to visit Kenzie.  Things took an unexpected turn and we went South for a bit and were by John Wayne airport. Maybe Kenzie was with “the Duke” and keeping him safe. We stopped at a house with a lot of dogs and actually went in.  I could hear barking upstairs and in the garage. The dog we met in the street came into the house with me. We romped around for a bit and left for a motel room. The next morning (Saturday), we returned to the house. The peeps talked while I romped with the same dog from yesterday. Then, we got into the car including the new dog! We started up and hit the freeway. The signs started to give the distance left for Phoenix. I guess we were going home-compared to my previous road trips to Oregon and Montana, this was going to be a short one. We got home with the new dog! He told me it was time to celebrate and break out the Mollie treats! 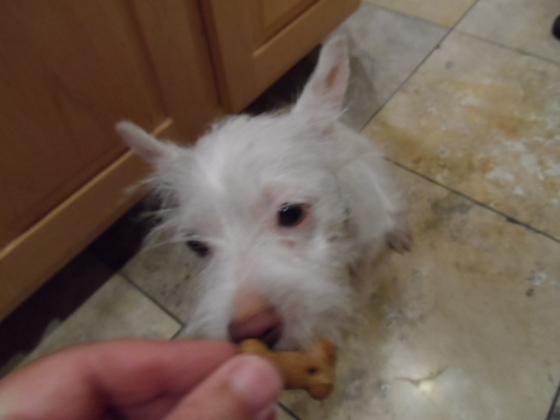 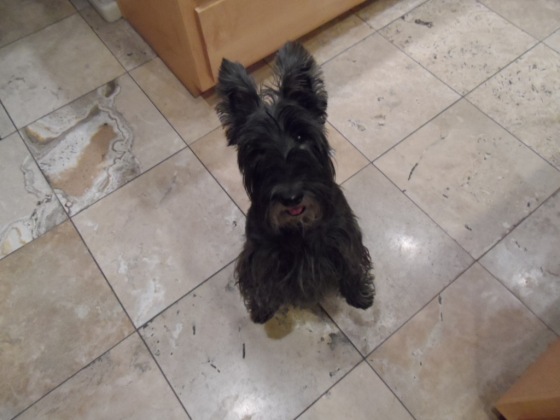 Amazingly enough, They said “YES”. A new friend and Mollie treats all in one time. WOW.

I knew Kenzie better than anybody. He would have felt that nobody liked him if They never got another dog. He told me that if the new dog was even half as good as the Kenzer, it would be great. Kenzie would have liked the fact that the new dog was in a kill shelter and the paperwork just said “stray” for origin. Nobody knows anything about her. Heather at lovebugsrescue saw her in a pen with a group of dogs in the kill shelter and took her home to foster. It is estimated that she’s seven months old judging by the time of baby tooth loss. The paperwork from lovebugs has her birthdate as Feb 30, 2012. 2012 must have been a hell of a leap year and I missed the party. She was at lovebugs for a few months, got spayed and microchipped. She has the fur of a Westie but she’s not a pure Westie. The ears are more Scottie. She holds her tail up like a terrier. 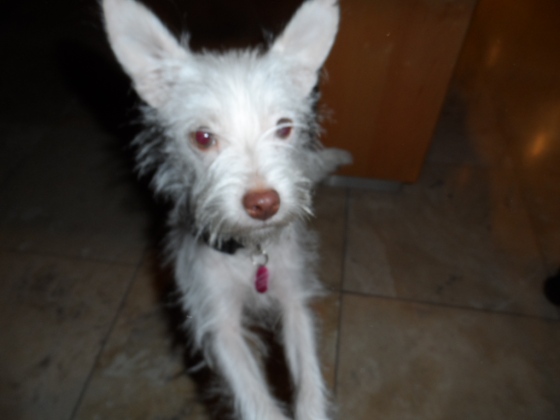 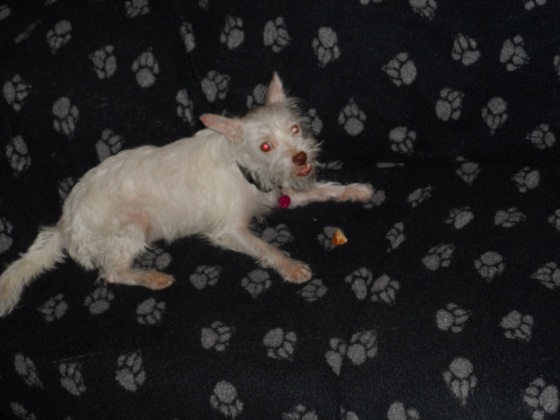 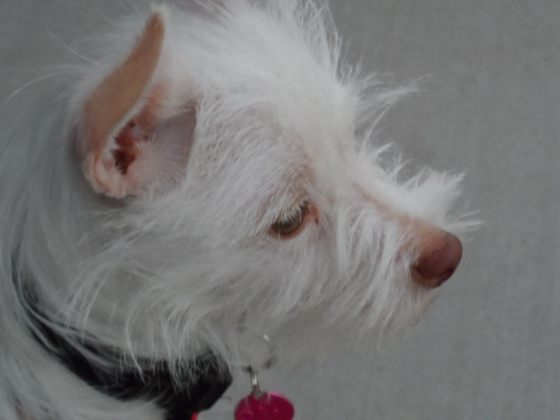 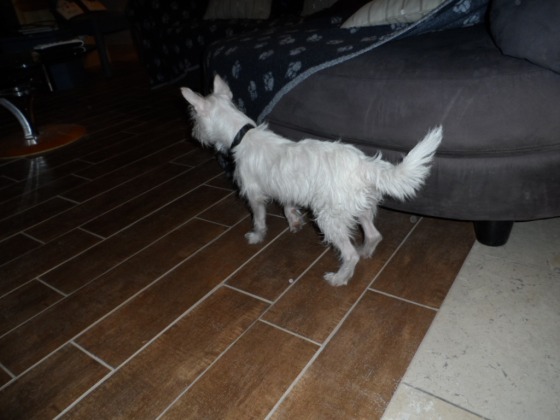 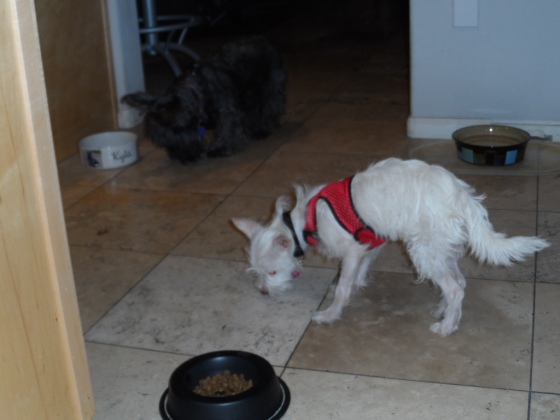 Lastly a big thank you to all of you who featured Kenzie on your site and/or left comments here. We saw them and appreciated them. For those who did that and also for those who shed a tear about Kenzie, we have an award, but not the usual award. You don’t have to do anything to accept it-you already earned it. I’m not going to name names, but if you feel you deserve it, you do. It is the “May the blue bird of paradise smile on you” award. 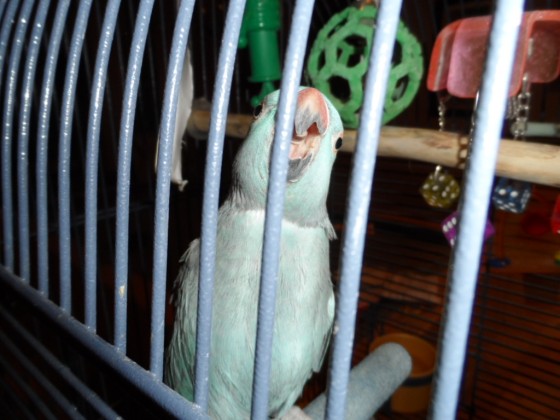 Ok, Stuart, I know this is Kismet but bear with me, I’m running on a small budget. I want to give a special bluebird award to Heather at lovebugsrescue.org. She was wonderful all the way, had us in her home and I don’t know where she finds the time. She had the fosters upstairs and the garage was taken over by a poodle who was pregnant and delivered 3 puppies. They may turn out to be cockapoos but it is still too early to tell. I know there are at least two rescue peeps who follow this blog. To honor them and Heather, would you take 30 seconds to send Heather a quick email to heather at lovebugsrescue dot org and tell her where you’re from and give her a thank you for what she does. Heather looked at this blog before we got there and He pointed out that there are readers from all over. She didn’t believe it but did request that we mention lovebugsrescue. Kyla never does something half way, not only are we mentioning and thanking her, we’re going to flood her mailbox from around the world to tell her that what she’s doing is worthwhile and appreciated. Heather is on the right (OK, so I stole the picture from http://www.lovebugsrescue.org) but Heather won’t mind. Sending the email is optional, but it puts the icing on the cake for the award. 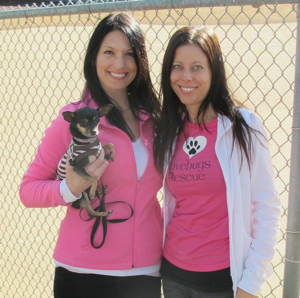 Also, all of us have to put our collective canine intelligence to work. Please leave comments if you have some idea about either or both of 2 things:

1) Part of the new dog is Westie. Got a clue about the rest?

2) The new dog was called Roxy but really doesn’t answer to that name (or maybe the terrier part just ignores it). She needs a name. Suggest away-She will decide. I suggested Kendra to honor Daisy’s friend and She thought it was a beautiful name but it was too close to Kenzie so She would be uncomfortable at first. Kenzie is out-we never recycle names- so there won’t be another Kyla, either. Roxy is fine, except there is a Roxy in blogville and there might be confusion. Her list of possibles are

but nothing has jumped out. A name that isn’t already used on some blog is best so there is no confusion. And, no, it doesn’t have to start with “K”, but that’s the way She prefers it, so be advised.. Please suggest away and don’t forget number one-it isn’t a test and there’s no wrong answer (no, Mollie, I don’t think Great Dane is correct).

We’ll be posting soon about the antics of newwhat’sherface. A video also!

It’s good to be back. I may not comment for a couple of days as I have to show the newbie who’s boss. I’ll read your blogs and posts but most of my time will be training her. She’s a little shy right now, but I’d be mortified if I had to spend time in a kill shelter.

23 comments on “Catching Up”