Posted by Kismet on October 21, 2012 in Uncategorized

Enough of this bit about the world ending. I am concerned, however, about a few things. First there was the frog in the swimming pool in the middle of the desert. He/She (gender only matters to another frog) was removed and put in the bird bath. Well, (s)he’s OK and was in the pool again. We removed him/her and put him/her in the bird bath again. He/she hopped out and was on his/her way again. He ran inside to get the camera but the frog was already on the ground and He had to leave it to herd Kaci and me inside before we knew it was there. 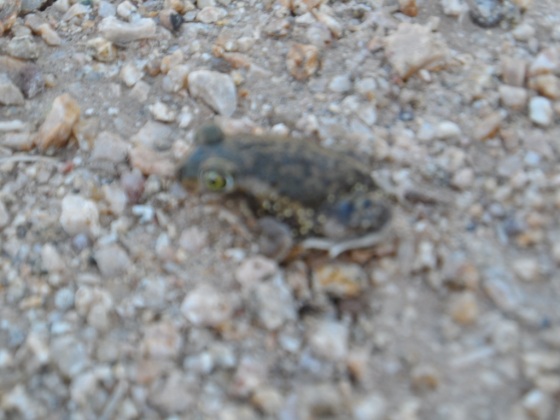 Then there’s this beautiful cactus we all call the Monsterosa. It is not native since one never sees one in the wild here.

Notice the two flowers. The native cacti flower in April and May so the seeds are dispersed in time for the monsoon rains that come in June through September. Why would this cactus flower in October? Is it an omen that we called it the Monsterosa and it flowers in time for Halloween?

Does anyone recognize this cactus? No, Stuart, I don’t believe you when you say you have a bunch in your back yard in Virginia.

So before I join the world-is-coming-to-an-end camp, does anyone have an explanation for baby frogs in the middle of the desert? Does anyone know why this cactus flowers in October? Maybe it is native to the Southern Hemisphere and supposed to flower in October?

They’re coming to take me away, so I need reassurance about things soon.

← Who wants to be a Millionaire?
The Apprentice →