Posted by Kismet on November 19, 2012 in Uncategorized

Half of the Major League Baseball teams get ready for the season here in Arizona. Pitchers and Catchers report around February 15 and the practice games run the month of March. Kaci and I decided that we’ll hold Autumn training for Kylaball on our  Astroturf Stadium. We haven’t sold the naming rights yet and we’re hesitant to do it, considering the problems that selling the name entails. The baseball park in San Francisco (opened in 2000) was originally Pacific Bell Park, and when SBC Communications bought Pacific Bell the place was SBC field. Then SBC was bought by AT&T and now it’s AT&T park. All these are telephone companies, why didn’t they just name it Phoney Phield in the first place? Then there’s the park here in Arizona which opened in 1998. It was originally Bank One Ballpark (everyone called it the BOB). Bank One was bought out by J. P. Morgan and renamed Chase Field. Why do that when “The Morgue” was available and a perfect tie in to their corporate image? Then there is the football stadium in San Francisco which has had many corporate names and one of them was “Monster Park”. Let’s not even discuss Enron Field in Houston. Anyway, the name of our place to play is up for sale.

Kaci and I are getting ready for the season. Here’s how:

Kaci is a rookie so she does stuff that newbies always do like the “Bogart Move”.

It will be a few years before she perfects veteran moves like my signature “Dumbo Pose”. 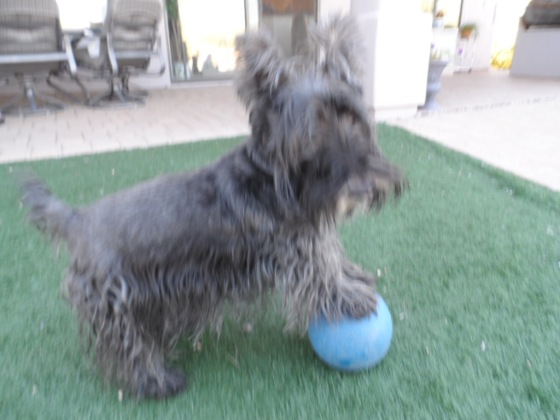