Kaci here! Kyla would never tell you and especially she’s not one to complain to put the damper on the birthday celebration for Ranger and Stuart (she still doesn’t want it known but I’m telling you-just don’t tell her I told you).  The good news is that the vet’s kids won’t have to worry about their college fund. The bad news is that Kyla is in bad shape. She was listless and on Tuesday morning, she didn’t want to eat breakfast-now that is the sign that she’s really ill. Into the vet she goes for a medical spa day. They ran tests (the results came in on various days) and had an water injected under her skin her temperature was 3F 2C above normal. Wednesday she spent at home but was perky in the morning and worse as the day went on. Thursday she was sort of OK but into the vet in the afternoon because she was worse for another IV all-afternoon session. Yesterday evening, Thursday, we thought there was a slight possibility we might lose her. Today, Friday, was another all-day vet session with IV. The test results kept coming in, no valley fever  but the final result was that she has pancreatitis. She was given anti-biotic pills after Tuesday but it doesn’t appear to be biological. She was give pain relief on Thursday but the doctor says that she’s “one tough terrier” and doesn’t complain but there are little tells that she has pain. 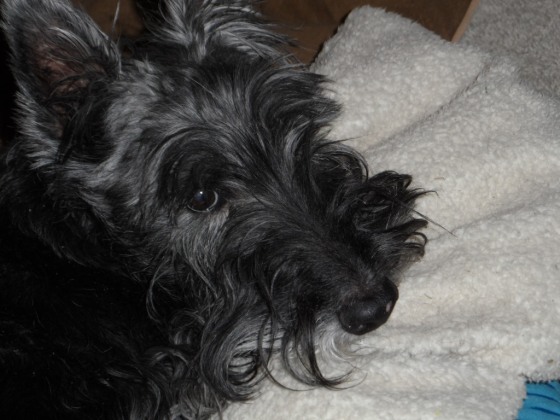 She’s been put on an extremely low-fat diet. Her dinner tonight was boiled potatoes (with no garnish). She also has some bad liver signs and has some hepatic pills. Tomorrow Saturday, it’s probably a half day of IV treatment. She eats well, but doesn’t drink well and is dehydrated.  I’ll keep you posted as long as she doesn’t see this and take away the computer.

He wants all of you in the Southern Hemisphere to keep a watch out for His wallet. He says it went “Down Under” but what He really wants is His BFF Kyla back and healthy. She has the IV attachment still in her foot and I’m supposed to stay away from it.

← The end of the trail.
Hi everybody →

44 comments on “Things aren’t so good”