Posted by Kismet on June 5, 2013 in Uncategorized

Earlier this week, Stuart reported on his trip to North Carolina where he thought there were wild pigs about. We have them in Arizona. Well, not pigs exactly because pigs are native to the Eastern Hemisphere and any true pigs are descendants of escapees brought here by humans. We do have a native member of the pig family, the peccary which is known locally as the javelina. It’s good to stay away from the javelinas because they are pack animals (where’s there’s one, there’s more) and any animal that eats prickly pear cactus (thorns and all) and sharpens its teeth just by closing its mouth has my respect. Here are some pigtures taken with a cell phone by Them when Kaci and I were at home. 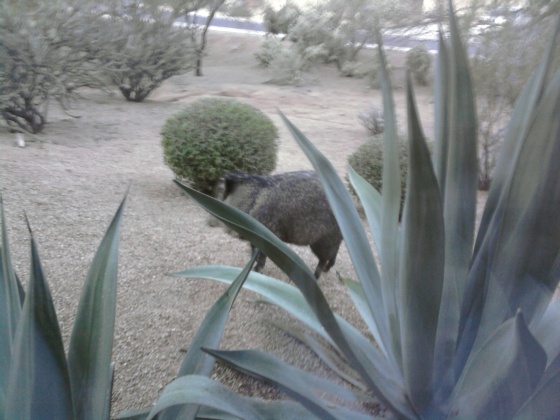 When asked if there were such an animal as a “Guinea Peccary”, expert Basil of hutchagoodlife, gave the definitive answer. “Whee don’t know, got grass?”.

36 comments on “Our Wild Pigs”