Posted by Kismet on July 10, 2013 in Uncategorized

Just so you don’t think I’m making this up, here’s the link  (http://www.dailymail.co.uk/sciencetech/article-2358304/The-WORST-car-inventions-took-Magnetic-minibars-glovebox-car-record-players-sack-carried-dogs-outside-car-fresh-air.html) .

Dogs have always had a love/hate relationship with cars since cars came on the scene. We love to stick our heads out the window, enjoy the breeze, and get a whole bunch of whiffs in rapid succession. The bad news is the dogs lost in car crashes, run over, and those left in hot cars for a long time.  Here’s a really, really bad idea-the dog sack: 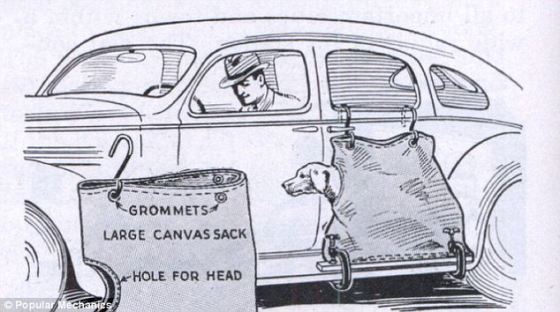 You could just see where this was going. It doesn’t stop at a dangerous ride outside. You put the sack under the hood and put a treadmill under it. I can just hear the humans bragging about what gas mileage they got. The world’s first hybrid. It’s a good thing that this atrocity was never produced and didn’t get out of the mid-1930’s. If it were a great idea, humans would have made the dog drive and they’d enjoy the sack themselves.  In a marvel of early ecology, these sacks may have been recycled in the 1950’s as sack dresses-who knows?

This is the only way to travel, in my Scottiemobile (for those who haven’t seen my ride yet):

29 comments on “Another bad idea”