Posted by Kismet on March 23, 2014 in Uncategorized

We live in New River, Arizona. There are no stop lights here and usually no excitement. Last night, we had this

A helicopter (usually for medical evacuation purposes) also came and went. This was about 300 yards or meters away from our house and the footage was taken from our roof. We had no idea what was happening but this morning we found out. There was another accident on Circle Mountain Road which is the northern border of our property. We went to the scene. 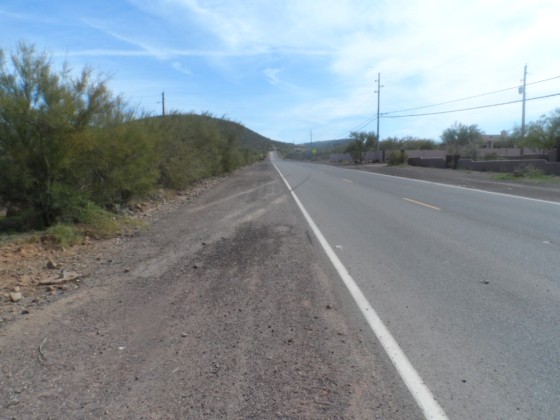 If you look closely or enlarge the photo, you’ll see a rider on horseback to the left of the road. Since we drive on the right side of the road, the skid marks start on the wrong side. It appears that the driver jammed on the brakes for something (no ABS?) while being where the opposite direction traffic is supposed to be and lost control of the car and left the road. As you can see, the road couldn’t be straighter and the speed limit is 45mph (around 70kph). There’s no excuse. 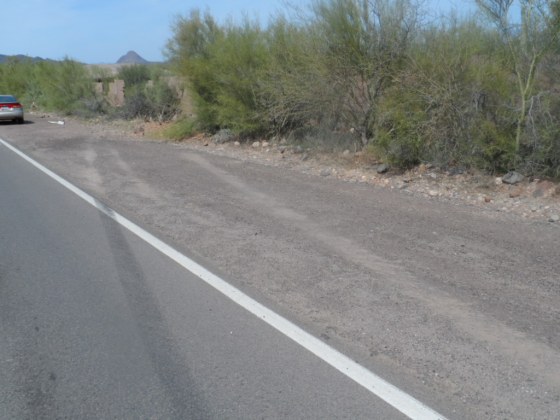 Here are the skid marks from the other direction

There was an auto part still there.

Oh no-right over a Palo Verde tree, into the fence and a crash landing at one of our neighbors. We still don’t know the details. What’s going on here?

On the same road in January, a car lost control and a 26 year old woman was killed in a single-car accident.

About 8 years ago, very close to our house, a 14 year old girl and a 16 year old boy were killed when the ATV the girl was driving went straight through a stop sign and got creamed by a truck. The helicopter landed almost in our back yard. What were they doing at almost midnight on a Saturday night? I’d say there was something in the water but we’re all on well water here.

As an animal I think that the rider on horseback in the first photo has the right idea. Drive something that’s smarter than you are.

← A visit from Godzilla
Kali is going to school →