Posted by Kismet on October 30, 2014 in Uncategorized

Old timers to my blog will remember about Sick Vick. If you want to refresh your memory see this. I don’t expect everyone to be up on American football but this isn’t a football story. If you don’t know, do a search on Michael Vick and dogs. I’m not going to repeat it here, but it is sick.

Last Sunday, the Philadelphia Eagles came back to Arizona to play a game. He was there working and I gave Him a mission. See what’s happening with the Philadelphia fan base.  If you looked at the link provided above, there were a lot of Philadelphia fans who were wearing Vick jerseys. This is the report from now, 2 years later.

There were a lot of Philadelphia jerseys. Most were of quarterbacks, the most glamorous position in football and the position Vick play. Some jerseys were quarterbacks that no longer play football-Randall Cunningham played 20 years ago and there were a couple Cunningham jerseys. 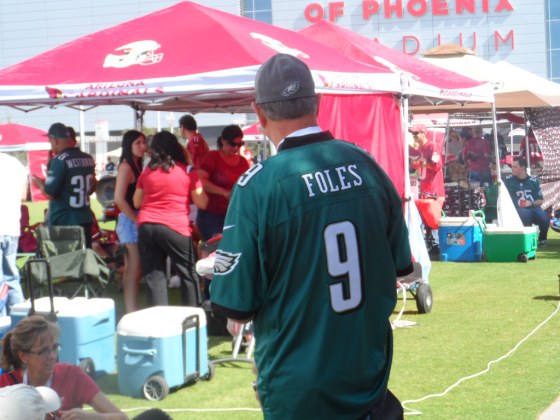 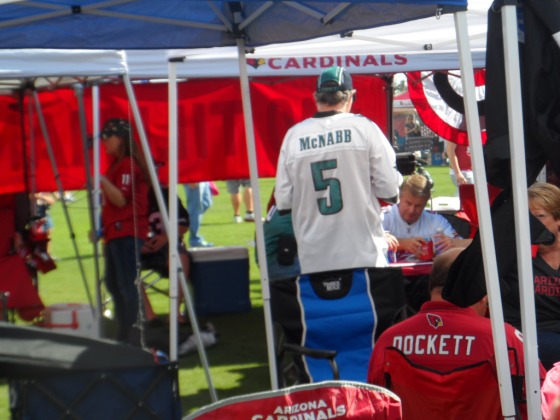 Nick Foles is the current quarterback and Donovan McNabb retired a few years ago. He was feeling good until He spotted one idiot

But only one is a big improvement. Does this mean that Philadelphia, “the city of brotherly love”, suddenly lives up to its name? Probably not. Sick Vick is playing for the Jets out of New York City this year and the Jets aren’t scheduled to play a game in Arizona until 2016.

← Thanks to Everyone!
Scary stuff on Halloween →