Posted by Kismet on March 10, 2015 in Uncategorized

Yesterday, I got an email from ScottieMom wondering how far I was from San Bernardino, California because there was a Scottie in need.

so I’ll steal the picture 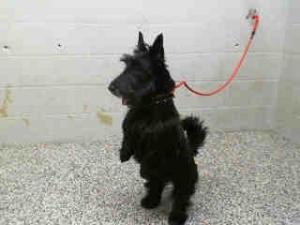 It looks like he’s in a sterile jail cell. The description says 3YO Scottie mix, but i think they say that about every rescue to avoid problems later for false advertising. Do you think that he is a mix? I called the government (City of San Bernardino) shelter in the morning- And was on hold forever. Now, this dog was scheduled to die like today-not on Scottie Mom’s and our watch. We had a sinking feeling when our phone calls to the City of San B weren’t returned. Then He wrote to Southern California Scottish Terrier rescue. A few hours later, we got an email back that the dog was adopted this morning to someone with Scottie experience. YAAAAH TEAM!

Thanks to Scottie Mom, we would have gone to there tonorrow (five hours one way) to pick up the little guy. Boo Hiss to government flunkies who should NOT be in charge of life and death matters. It’s 10 hours later and still no call back.

50 comments on “Thank you, Scottie Mom!”